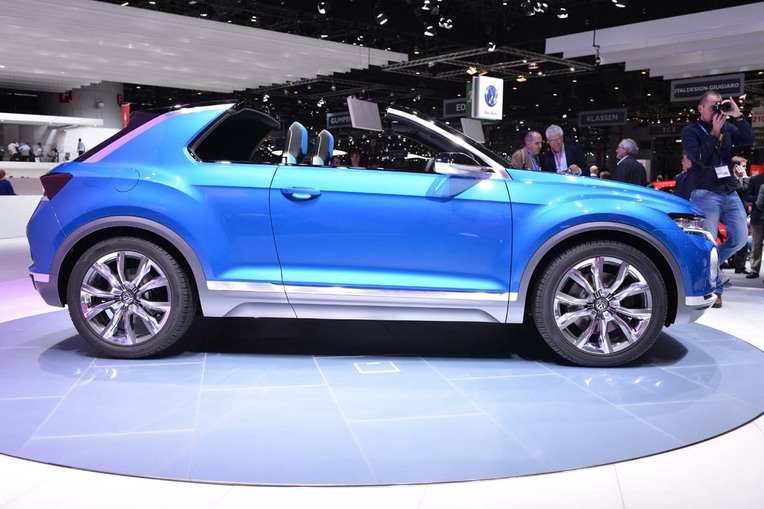 At the Geneva Motor Show, which starts today, Volkswagen is presenting the T-ROC study – a concept car with a progressive design in the Golf format. Volkswagen's presentation at the show is supplemented by the world premieres of the Golf GTE with a plug-in hybrid system, the Scirocco with a redesigned front and rear section, and three Polo derivatives: Polo BlueMotion, Polo BlueGT and CrossPolo.

The all-wheel drive T-ROC concept car combines the talents of an all-wheel drive SUV – which does not shy rocky off-road tracks – with the summer lightness of a cabriolet. For example, the centre part of the roof consists of two halves that are simple to remove and stow away in the boot. Its progressive design is emphasised by a powerful 135 kW / 184 hp direct-injection turbodiesel engine. The 2.0 l TDI has maximum torque of 380 Nm and average fuel consumption of 4.9 l / 100 km.

Even more powerful, economical and sporty – that's the new Scirocco being presented in Geneva. This icon, whose sales top a million vehicles, celebrated its début exactly forty years ago in the same place and has undergone considerable further development in terms of both engineering and appearance. In addition to a redesigned front and rear section, dynamically contoured headlights and LED rear lights round off the exterior. The improved engines boast extra power of between 3 and 20 hp, whilst at the same time fuel consumption has been reduced by up to 19 percent. Also new on board as standard are auxiliary instruments (charge pressure, chronometer, engine oil temperature) which pay tribute to the original Scirocco. Once again, the top model of this series is the Scirocco R with 206 kW / 280 hp – as always marked by an independent design and equipment features.

A month after the world premiere of the new Polo in Wolfsburg Volkswagen is presenting further new developments in this model series in Geneva. For example, for the first time the efficient trendsetting "BlueMotion" technology will be available in a vehicle with a 70 kW / 95 hp turbo petrol engine. With fuel consumption averaging 4.1 l / 100 km the Polo TSI BlueMotion2 sets a new benchmark for petrol engine cars in its class. Once again, the Polo TDI BlueMotion3 (55 kW / 75 hp) with a three-cylinder engine consuming just 3.1 l / 100 km, sets the record for diesel cars. This means that the new Polo TDI BlueMotion is one of the most economical five-seater cars worldwide.

Like its predecessor, the latest version of the Polo BlueGT4 boasts top dynamic performance coupled with maximum efficiency. This is thanks to the cylinder deactivation (ACT / active cylinder management) fitted exclusively in this engine by Volkswagen. The engine power of the Polo BlueGT has been boosted to 110 kW / 150 hp (instead of the previous 103 kW / 140 hp).

For the CrossPolo Volkswagen has once again opted for a striking off-road look. In addition to the silver underbody protection on the front and rear bumpers, black covers on the wheel arches, sills and doors create an overall impression that is both sporty and robust. Fresh colours and fabric for the seats and smoked rear lights round off the latest CrossPolo model to perfection.